We may earn money reviewing products from the affiliate links on this site. Thank you all!

Soldering torches have plenty of different uses, ranging from repairing small electronics to creating your own necklaces and earrings. Having a portable soldering torch such as the Dremel 2000-01 Soldering Torch can be a great opportunity for the everyday DIYer, especially if you’re a person who is always interested in learning how to use new tools. With its sleek appearance and user-friendly design, it’s surely a device that beginner and veteran soldering torch users will benefit from.

Quick Navigation
Who Is this Product For?
What’s Included?
Overview of Features
How to Use It?
Alternatives
Conclusion 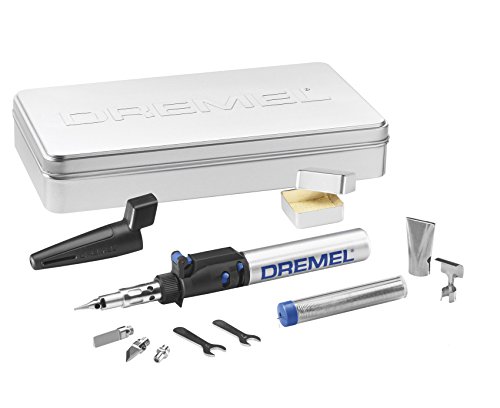 The Dremel 2000-01 Soldering Torch is specifically designed to give the user as much versatility as possible, especially since it has plenty of accessories that are phenomenal for shrinking, wood burning, heating, soldering, and even hot cutting. In short, it’s an all-in-one tool that helps reduce the number of tools that you need in your toolkit. It also has a sleek and stylish appearance that will make you proud to show it off to your friends and family members.

Who Is this Product For?

If you’re the type of person that wishes you knew how to solder things together, this is the ideal tool for you. However, it’s easy to see how relatively anyone is able to benefit from having a soldering iron at their disposal. No matter if you want to repair your computer’s hard drive or if you need to fix a video game console, the purposes are relatively endless.

Even parents will be able to benefit from the Dremel 2000-01 Soldering Torch, especially if their kids tend to play rough with their electronic toys. Instead of having to throw toys with damaged electrical systems in the trash, you can easily solder wires back to their original position to return the toy to its original glory.

When you first open the Dremel 2000-01 Soldering Torch, you’ll notice that it comes with plenty of pieces for your enjoyment and ease of use including the following:

Some of the best features of the Dremel 2000-01 Soldering Torch include:

How to Use It?

Another difference between the two is that the Portasol 010589330 has seven tips (four soldering, one hot air, one deflector, one hot knife), versus the six tips with the Dremel 2000-01 Soldering Torch.

If you’re curious about how a soldering iron can revolutionize the number of things that you can repair around your house, you should surely look into a soldering iron such as the Dremel 2000-01 Soldering Torch. Specifically designed to make all repairs simpler than you originally thought and with a sleek and incredibly user-friendly design, you’ll be able to harness a substantial amount of heating power in your hands for plumbing work, jewelry making, or even electronic repairs.

The Dremel 2000-01 Soldering Torch is also a great unit for people who want to learn how to use a soldering iron and those who have used soldering irons in the past and are looking to replace their outdated and less resilient units.

About the Author Dan