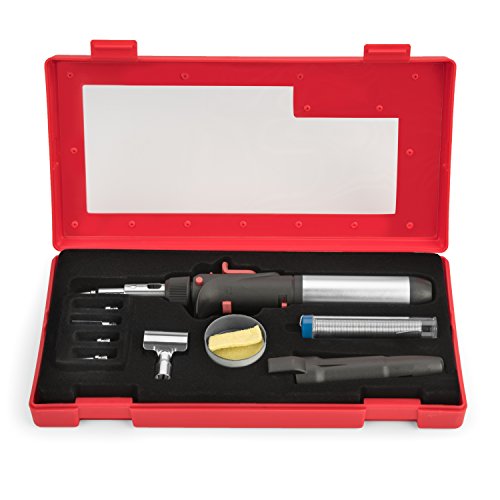 Similar to any other soldering torch, the EAGems Butane Soldering Iron Torch is designed to give you the ability to solder two metals together for air tight or water tight seals, building jewelry, creating models, or working with electronic circuits. It’s a very versatile tool, which is what makes it one of the better things to have in your toolkit for everyday projects around your home or for purposes that are more industrial.

Who Is this Product For?

Unless you’re the type of person who isn’t responsible for any at-home renovations, you’re going to find plenty of different uses for the EAGems Butane Soldering Iron Torch. As mentioned, it’s great for completing a variety of projects ranging from bending PVC, repairing jewelry, to creating other arts and crafts.One group of people that will surely benefit from this particular soldering iron are those who are tired of carrying large handheld tools from one job site to another since this soldering iron is incredibly compact and portable. Also, it’s entirely powered by butane, which means you don’t need to worry about any cords or trying to find an electrical outlet near the item you need to solder.Additionally, even if you’re a first-time soldering iron owner, you don’t have to worry about dealing with intimidating temperatures as this model only heats up to 850°F and is entirely adjustable. However, when you place it in torch mode, it can heat up to 2400°F.

When you order the EAGems Butane Soldering Iron Torch, you’ll get all of the accessories and parts you’ll need including the following:

A few of the most outstanding features of the EAGems Butane Soldering Iron Torch include:

How to Use It?

As one of the many gas-powered butane soldering torches, the EAGems Butane Soldering Iron Torch may have more features than you ever imagined, especially when compared to other torches on the market. Designed with the everyday user in mind, there are a wide variety of things that you’ll appreciate about this soldering torch, ranging from its multipurpose design to its innovative carrying case.Once you’re able to unbox your brand new iron, you’ll truly be able to see all of the possibilities that it has to offer, which makes it one of the easiest tools to use to your advantage on a daily basis.

When comparing the EAGems Butane Soldering Iron Torch to other soldering torches on the market, you’ll find that there are a couple of other models that have more features that you might be interested in. One of which is the Dremel 2000-01.Although both soldering irons can be used for the same purposes, the Dremel model comes with a variable temperature level that is very user-friendly, making it simple to adjust the torch to your desired temperature. You’ll also find that the Dremel 2000-01 has a lock for lengthy projects where you won’t want to hold the trigger down for continuous heat.

The EAGems Butane Soldering Iron Torch is a phenomenal choice for first-time soldering iron owners who want to learn their way around an iron and how to use it effectively on different types of materials. With that being said, it doesn’t have as many features as you would get from other soldering irons. However, it can be a great choice for beginners and veterans who want a simple and straightforward tool to use.From completing everyday projects such as fixing children’s toys or other electronic components to more creative tasks such as repairing pieces of jewelry, you’ll never run out of uses for your new soldering iron.